I cheered when I read the recent Washington Post article dissin’ the Paleo Diet! Finally, a voice of reason and sanity to refute those who still believe that the Paleo Diet is the healthiest way to eat. 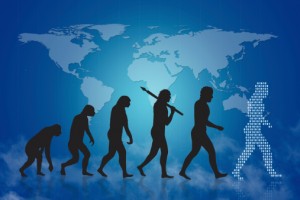 While I totally agree that we did not evolve to eat refined, highly-processed, or chemically-laden foods, we didn’t really evolve to be “healthy,” either.

“Natural selection really only cares about one thing, and that’s reproductive success,” points out the author of The Story of the Human Body: Evolution, Health, and Disease, Harvard University professor of human evolutionary biology Daniel Lieberman.

Stone-age humans rarely lived many years beyond reproductive age, and I think we can all recognize that it is generally easier to feel healthier with less attention to nutrition in a young and forgiving body than with one in middle-age.

Additionally, since early humans lived in many ecosystems with many different foods available, there really was not one single “diet” available to everyone. We have survived because we are omnivores and could find sustenance from a wide range of sources. Lieberman notes that there is evidence to show that hunter-gatherers in the Middle East ate barley – a direct refutation of the premise of the Paleo recommendations of a grain-free diet.

My feeling is that the Paleo Diet is simply a re-hashing of the Atkin’s Diet, The South Beach Diet, and other low-carb diet fads from our recent past. Not only are these diets difficult to sustain over the long term, but they are simply not engineered to produce vibrant health.

My advice about the Paleo diet: If you are really looking to be healthier, skip this fad and focus on eating whole foods and avoiding chemicals and toxins.

Are Low-Fat Diets the Healthiest Way To Go?→