At an elegant fundraising event last night, my husband cornered one of our Republican state representatives and asked where she stood on the GMO labeling initiative coming up before Colorado voters next month. “I’m firmly against it,” she declared, “because I think GMOs might be needed in order for us to have enough food in the future.” 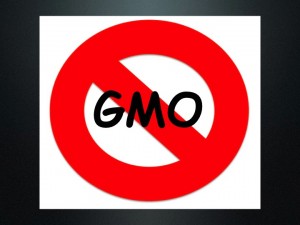 This debate is not about should there be GMOs available to to grow or not. No legislation is looking at whether or not tinkering with nature and our food supply is a good idea: that train has already left the station.

Rather, it is about individuals having the right and ability to know which foods contain GMOs and then having the individual choice of whether to choose to eat that or not. This is a case of personal rights to transparency and choice vs. corporate cloaking and profits.

I’m re-printing an entire article below about recent testing by non-biased Consumer Reports for GMOs in our food supply because I think it provides a good overview for those who still might be confused as to why we might need to monitor food suppliers in this way.

More than 70 percent of Americans say they don’t want genetically modified organisms in their food, according to a recent Consumer Reports National Research Center survey of 1,000 adults. The trouble is, it’s hard to avoid them.

Consumer Reports’ tests of breakfast cereals, chips, soy infant formulas, and other popular products found that GMOs lurk in many packaged foods—including some that carry labels suggesting that they don’t have these controversial ingredients.

In more than 60 countries, manufacturers must label foods that contain genetically modified ingredients. But GMO labeling isn’t required in the U.S. Yet our survey found that 92 percent of Americans want genetically modified foods to be labeled. And concerns about the potential health and environmental risks of GMOs coupled with an unwillingness on the part of the federal government to mandate labeling are leading many states to take action on their own.

dozen other states, including Colorado and Oregon, where residents will begin voting on a GMO-labeling ballot initiative in late October. “Federal law already requires labeling that lets consumers know whether foods have been previously frozen, made from concentrate, pasteurized, or irradiated, and we believe the label should also say if food is genetically engineered,” says Jean Halloran, director of Food Policy Initiatives at Consumers Union, the policy arm of Consumer Reports.

What are GMOs, anyway?

Genetically modified organisms are created by deliberately changing the genetic makeup of a plant or animal in ways that could never occur in nature. The majority of GMO crops currently on the market have been genetically engineered to produce their own pesticides and/or withstand herbicides that normally would kill them. Farmers use the herbicides to control weeds.

You may be surprised to know that the federal government has not mandated that genetically modified organisms be proved safe before they’re used in your food. But safety assessments are mandatory in other major developed countries, including China, Japan, and the countries of the European Union. Some animal studies suggest that GMOs may cause damage to the immune system, liver, and kidneys. “There hasn’t been enough research to determine whether GMOs are harmful to people,” says Michael Hansen, Ph.D., senior scientist at Consumers Union and an authority on genetic engineering. “But scientists around the world agree that GMOs have the potential to introduce allergens and create other unintended changes that may affect health.”

The use of genetically modified seeds has steadily grown over the last two decades. That has led to about a 10-fold increase in farmers’ use of glyphosate, a weedkiller better known as Roundup, which is made by Monsanto—a company that also produces genetically modified seeds—because the herbicide won’t harm their GMO crops. But that in turn has created a new  problem for farmers to battle: a rising number of “superweeds” that have now become immune to glyphosate. “This defeats one of the major reasons why GMOs were introduced in the first  place,” Hansen says.

Companies that produce genetically modified organisms and their allies in the food industry argue that genetic  engineering is just an extension of traditional breeding, which humans have been doing for thousands of years. But that process involves the transfer of DNA between closely related plants or animals. Genetic engineering techniques, on the other hand, move genetic material from any organism to  any other organism.

There is fierce opposition to GMO labeling from many seed manufacturers and big food companies, which have spent nearly $70 million in California and Washington state alone to defeat GMO-labeling ballot initiatives. One of the major arguments they make is that stamping foods with a statement such as “contains GMO ingredients” implies that those foods are inferior to other conventional or organic foods when there’s no evidence that genetically modified organisms are harmful. “Our position is that GMO foods should be labeled, period,” Halloran says. “Consumers have the right to know what’s in their food so that they can make informed choices.” (Learn what you can do to support mandatory GMO labeling.)

GMOs are found in surprising places

GMO labeling should be required in the U.S., but in the  meantime some food manufacturers are choosing not to  use genetically modified ingredients and are noting that on their products’ packaging. To see how many foods have GMOs and whether you can trust the claims you see on food packages, we bought more than 80 different processed foods containing corn or soy between April and July 2014. (Corn and soy are the two most widely grown genetically engineered crops in the U.S.) We tested at least two samples of each product, each sample from a different lot, to measure the GMO content. Then we compared our results with any non-GMO-related claims.

Find a list of all the products we tested in our full report from Consumer Reports.

Genetically modified corn and soy are used in a wide variety of foods. Nearly all of the samples we tested of the products that did not make any non-GMO-related claim on the package did, in fact, contain substantial amounts of genetically modified corn or soy. They included many familiar foods, such as Kellogg’s Froot Loops, General Mills Corn Chex, Jiffy Corn Muffin Mix, Doritos Oven Baked Nacho Cheese chips, and Boca Original Vegan Veggie Burgers. Four of the products in this group were soy-based infant formulas: Enfamil ProSobee Soy Infant Formula, Gerber Good Start Soy, Similac Soy Isomil, and Similac Go & Grow Soy Infant formula.

Because our tests represented only a small slice of the  market, we can’t draw conclusions about all products containing corn or soy, or about every product for a given brand. But until genetically modified organism labeling becomes mandatory, our test results can help you decode the meaning behind the claims you see on grocery store shelves.

This indicates that a third party has certified that the product complies with USDA Organic guidelines, which forbid the use of genetically modified organisms. Our tests found that products with organic ingredients—such as Amy’s All American Veggie Burgers, 365 Everyday Value Organic Corn Tortillas, and Soy Dream Vanilla Frozen Dessert—qualified as non-GMO. Many of the products that make organic claims also make some kind of non-GMO claim on their packaging.

All of the products we tested with this seal qualified as non-GMO. That means the product had no more than 0.9 percent genetically modified organisms. (In EU countries, products that have ingredients that contain more than 0.9  percent genetically modified organisms are required by law to carry GMO labeling.) The Non-GMO Project certifies  manufacturers’ products through third-party testing. Among the products we tested that carried this seal were Post Grape Nuts Original cereal and Silk Original soymilk.

These claims made by the manufacturer—which may include the words “No GMO” and “Non-GMO”—have no standard definition and don’t require independent verification. Even so, most of the products we tested containing nonorganic corn or soy that made  an uncertified claim met non-GMO standards. These included Clif Builder’s Chocolate Peanut Butter Bar and Bob’s Red Mill Golden Corn Flour.

The exception was Xochitl Totopos de Maiz original corn  chips. The package read “No GMO” and “All Natural.” But our tests showed that the amount of genetically modified corn in the six samples we tested averaged more than 75 percent. The manufacturer said it uses corn from a supplier that provided test results with many of the deliveries Xochitl received  indicating that the corn was non-GMO. When we tested samples from two packages of Xochitl Totopos de Maiz Organic White Corn Chips, which were also labeled “No GMO,” we found that the product met non-GMO standards.

More than 60 percent of people in our national survey said they believed that “Natural” means “No GMOs.” But that’s not what our tests found. Virtually all of the samples we tested of products that made only a “Natural” claim did have a  substantial amount of GMOs, although since we did our testing some manufacturers have removed the “natural” claim or have become Non-GMO Project Verified.

“The confusing nature of this claim is just one reason we are asking the government to ban the use of ‘natural’ labels on food,” says Urvashi Rangan, Ph.D., director of the safety and sustainability center at Consumer Reports.

If you’re in favor of genetically modified organism labeling efforts and you live in Oregon or Colorado, your vote this fall obviously can communicate that message. Those who live elsewhere can contact their state legislators to express their support for mandatory labeling. This is especially important if you live in one of the more than 30 states that have legislation pending on this issue.

You also can contact your Congressional representatives in Washington, D.C., to urge them to support the Genetically Engineered Food Right to Know Act, a federal bill calling for mandatory labeling that has been introduced by Sen. Barbara Boxer (D-California) and Rep. Peter DeFazio (D-Oregon).

And for more information on GMO food and updates on labeling, go

to NotinMyFood.org or Consumer Reports.

Label Genetically Altered Foods: It’s the Right Thing To Do→

The Non-GMO Project and GMO Labeling→