ABC World News Tonight reported on May 30, 2014, about the dangers of chlorine-based swimming pools. 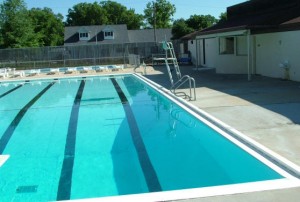 The problems come from the chemicals mixed into the water to keep it sanitary. Hydrochloric acid should be added to pool water near the surface at least a day before swimming in it and well-circulated  to be rendered safe, and should be stored away from all petroleum products to avoid accidental ignition.

The Centers for Disease Control reported 4,876 E.R. visits in 2012 from swimming pools in 2012. 48% were children, and 45% were considered poisonings from pool chemicals and vapors. 73% of these occurred during  the three summer months after Memorial Day.

There is an alternative to chlorinating pools that provides just as much hygiene and safety in the water, and that is to salinate. Yep, regular salt works just as well or better than chlorine for purifying water for bathing.

Although saltwater pool systems still generate chlorine due to breaking down the salt, saltwater systems create a reduced number of chloramines, an irritant which is a byproduct of oxidation. It is sanitization without harsh, man-made chemicals.

In our house, we installed a whole-house water filter to reduce our exposure to chlorine vapors during bathing. We also joined a timeshare which features saltwater pools rather than chlorine pools.

Unfortunately, most public pools are still chlorinated, but if you have your own pool, you can easily convert it to a saltwater system and safeguard the health of all who swim there.

The best advice to give summer-loving kids to stay healthy? Don’t drink the pool water!

Why drink water? Lose weight, save money, save the planet→