Faced with the remnants from a pair of delicious roasted chickens recently, I decided to create an Italian-Mexican fusion meal with pasta shells, goat cheese, and that secret ingredient: enchilada sauce. 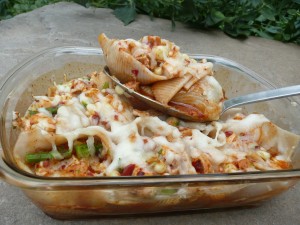 I had been so excited to find these Tinkyada Brown Rice Pasta Grand Shells recently, although you can certainly use regular wheat pasta shells. For this dish the important factor is the shape of the shells, what the Italians call conchiglioni, or large conch shells.

When I was a senior in college, one of my friends used to whip together huge Friday night pasta meals for a packed house of hungry kids. She and I actually both lived in Italy during the same time period but really became friends after we returned and would hang out speaking Italian and drinking lots of Chianti.

One Friday night I remember she mixed together a big bowl of ricotta cheese, mozzarella, garlic, oregano, and who knows what else, and proceeded to direct a team of us toward stuffing it into oversize cooked pasta shells. The stuffed shells then lined a baking pan before being drenched with marinara sauce and topped with more shredded mozzarella. It seemed like a feast.

So I had purchased these shells with something similar in mind only I didn’t know what yet. The leftover chicken meat and shreds from the carcass seemed like a good fit. From a run to the farmer’s market I added corn sliced off the cob (4 ears) and a large green chile (which I roasted over the stove burner, then peeled and seeded).

From the fridge I pulled out leftovers of 8 stalks of steamed asparagus and cut them into 1″ lengths. To finish off the stuffing I shredded two kinds of goat cheese: cheddar and mozzarella. Of course, you can easily use cheeses made from cow’s milk — we find goat’s milk cheeses easier to digest in our house and love the harder styles that taste just like recognizable flavors like cheddar, Monterey jack, and mozzarella. 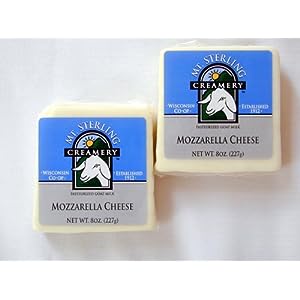 I put all of this into a big bowl and mixed it together.

Meanwhile, I had been boiling the shells in salted water. When they were on the firmer side of tender, I drained and rinsed them well.

Into a glass baking dish, I poured a few tablespoons of prepared enchilada sauce and painted it across the base and up the sides. I used another tablespoon to ladle stuffing into each pasta shell before placing it snugly into the baking dish.

When the layer of shells was complete I poured enough enchilada sauce on top to cover all of the shells, and sprinkled them with more shedded goat cheese. I put the dish into the oven (I actually used a toaster oven to cook outside on the porch this hot summer night!) at 325 degrees F until the sauce was bubbling and the cheeses had melted.

You should feel free to stuff shells with whatever you have on hand and make your own Italian-fusion cuisine!

Make Your Recipes Soy-free and Gluten-free→